As I continue to work on my screenwriting journey, as well as learning the craft of creating spec scripts for TV, I can see clearly how hard it is to adapt books into movies or TV shows. It’s a tough and arduous endeavor, and often times somewhat polarizing, especially when it comes to beloved works of fiction. I recently finished watching Good Omens on Prime, and If you haven’t heard anything about it, it is a limited TV series adaptation of a book collaboration between Neil Gaiman & Terry Pratchett, also titled Good Omens, which was released way back in 1990. This book has been a bestseller ever since it was first released and it’s one of those sci/fi fantasy books that continues to enjoy a solid die-hard cult following base. 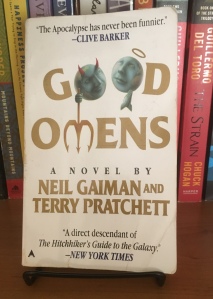 For some strange reason, this limited series is not generating as much buzz like other TV shows, and it seems to me that the most faithful and hardcore book fans of Neil Gaiman & Terry Pratchett were the ones who immediately binged on the show as soon as it was made available to stream. But regardless of the limited buzz, this show is considered to be one of the most successful shows on Amazon original series lineup and fans of the book have given this TV adaptation high praise as it compares to the original text. Which is a direct contradiction to the other adaptation of Neil Gaiman‘s book American Gods (Streaming on Starz). From the things I’ve seen and read online, it seems like this  American Gods TV version has generated some negative feedback when compared to the actual book. Good Omens is such a fun, well-executed show and casting Michael Sheen as Aziraphale and David Tennant as Crowley was pure genius. Their performances are excellent. There is even talk about expanding from the book and developing a second season. Which will be great, if only Neil Gaiman would continue to write future episodes and produce the show.

American Gods season 1 was pretty entertaining. I enjoyed it, but it is evident that there was plenty of material left out of the book, and season 2 is already available to stream, but I haven’t seen it yet, (will probably watch it in the next few weeks). I must confess that I have not read Good Omens or American Gods, but I know many people in my immediate surroundings who have read them both and they all share their discontent for American Gods TV adaptation and their praise for the Good Omens TV adaptation. The performance by Ian McShane as Mr. Wednesday on American Gods has been praised as the best thing from the show. I think he did a fantastic job with the part. But I also feel that there were other excellent performances to highlight like Pablo Schrieber as Mad Sweeney and Emily Browning as Laura Moon, and I think most of the cast did a solid job as well. So even though the first two seasons of American Gods have received mixed reviews (mostly from people who love the book), the show still ends up working well, and I found it to be visually very extravagant and beautiful. It is definitely worth watching.

Game of Thrones and Good Omens are an interesting example of how a previously released work of fiction can be successfully adapted from book form into a successful TV series as close to its original form as possible. Specifically Game of Thrones season one through five. Those seasons were very close to the books, with some omissions here and there, most notably the emergence of Lady Stoneheart assuming the leadership of the Brotherhood without Banners. I wished that particular storyline would’ve found its way into the show somewhere, somehow. Mainly since seasons three, four and five were based on the books A Feast for Crows  (Book Four) and A Dance with Dragons (Book Five) which is very interesting because both books share the same timeline. From season six through eight (Final season), everything is NOT based on the actual books. So once book number six (Winds of Winter) and book seven (A Promise of Spring) are both completed and released that is when we will finally be able to put everything together and compare the TV show next to the books accurately.

Game of Thrones gave me a unique perspective into the polarizing world of adapted works of literature. Game of Thrones was a TV series that generated so much feedback and chatter, were faithful fans who worship and canonize all of the five books of A Song of Ice and Fire were always quick to point out any inaccuracies within the storylines in the TV version. Usually right after a new episode would air I would check the Twitter trends and read all the banter going back and forth between the hardcore fans and the casual fans who did not read all the books but loved the show fanatically nonetheless. There was always criticism of the show, although the criticism was often positive, but yet, there was still plenty of unsatisfied Game of Thrones fanatics who did not take too kindly to any little deviation from the written works of George R. R. Martin. The fact of the matter is that both the books and the TV show have generated a worldwide cult following phenomenon, making it the most popular show in the world, which is something extremely remarkable. 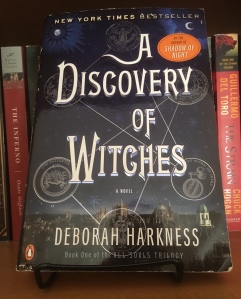 I also recently finished watching season one of  A Discovery of Witches (BBC America/AMC) which is an adaptation of the All Souls trilogy by Deborah Harkness. The show was pretty entertaining and fun to watch because when you blend vampires, witches, and demons into one storyline, it should make for one hell of an entertaining show, but the demons were somewhat cast aside and did not have a prominent role in the show (wanted to see more of them). I couldn’t help but be reminded of the Twilight series throughout most of the eight episodes of this show. This is another adaptation where the book is being consolidated into a cliff notes version of the story, and I feel that in this particular adaptation, the story did not have to be watered down or consolidated. There is plenty of time in eight episodes to bring a cohesive story together without compromising the source material or perhaps even make it a ten-episode season. In any case, I still enjoy the show and can’t wait for season 2.

When it comes to future adaptations of beloved works of literature, the possibilities are endless. There was the successful adaptation of Gillian Flynn’s Sharp Objects on HBO, which is another example of an efficient and deliberate way on how to adapt a book into a TV series without taking too much away from the original source material. The Outlander series is also a fan favorite, which is an adaptation of Diana Gabaldon’s book series also titled Outlander. We also have Alan Moore’s Watchmen coming soon to HBO. Hulu is developing Anne Rice‘s Vampire Chronicles into a TV series, which is precisely the proper way to present this type of material to an audience. The complex world that Lestat and the other characters of the vampire chronicles occupy needs to be presented in an extended TV format. I know Anne, and Christopher Rice are 100% involved in the creative process, from casting to developing the storyline, and I know Anne is a huge fan of British TV shows like Downtown Abbey and others, so I feel like this show will be epic. I’m a big fan of the first three books of the vampire chronicles, so I’m beyond excited, to say the least. Also, let’s not forget those Game of Thrones prequels being developed, oh…and there are the future adaptations of Robert Jordan’s The Wheel of Time sci/fi series coming soon to Prime (I think).

All of those current adaptations serve, and future adaptations will serve as an excellent source for aspiring screenwriters, it is a unique way for someone like me who is taking his first steps into the screenwriting process to use as a tool and reference. I would love one day to have a crack at adapting a book into a movie or TV show, but in the meantime, I have to continue watching, reading and most importantly…writing.

This is truly the golden age of television.