It has been 4 weeks of pure misery. This week the Redskins lost to the Giants 24-3, and there was absolutely nothing I can think of to try to spin this loss into something positive. Keenum looked anemic and ineffective, so they benched him and inserted Dwayne Haskins in the second half, but Haskins struggled. He obviously wasn’t ready to take over. We had nothing offensively; our running game was again non-existent. The penalties were excessive, which shows how undisciplined this team is. The Giants defense is awful, and we made them look like they were a top 5 defense. Saquon Barkley did not play, and our defense could not stop his backup, and to make things worse, whenever Daniel Jones would scramble for extra yards our ineptitude to stop him made this rookie quarterback look like Patrick Mahomes. Keenum is not the answer, Colt McCoy is who should be quarterbacking this team, but he still is recovering from his season-ending injury from last season. It seems like things are going to get worse before they get better. 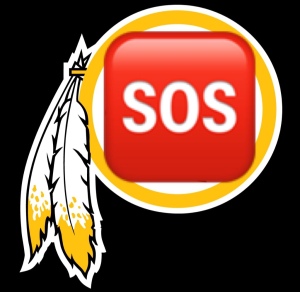 I honestly did not expect this team to be this bad. If you read my pre-season blog post, you could tell I was extremely hopeful about this season, especially regarding the defensive talent that we have accumulated from the last 2 draft classes. Even the talking heads over at ESPN/NFL Network expected this defense to be a top defense. So, what is the root issue here? Is it the defensive coordinator? Alternatively, is it something beyond the coaching staff? All I know is that by the time the game ended “Fire-Jay Gruden” begun trending all over social media. However, I do not think that is the real solution, or the quick fix to turn things around. Especially going into week 5, but there should be some changes. Massive changes between now and the offseason. There also needs to be upper management changes as well as coaching changes.

Most of the issues that have plagued this team for the last 19 years go all the way up to ownership/Management. Dan Snyder is a bad owner and should sell the team. He has lost the fan base. Bruce Allen is an incompetent President/GM. Everybody already knows about the RGIII/Mike Shanahan soap opera back in 2013. The Shanahans put together one of the most exciting seasons this team has ever seen, and at the end of the day, Snyder choose RGIII over this competent coaching staff, and we have been rebuilding ever since. We had Sean McVay and Matt Lefleur on the coaching staff of both Shanahan and Gruden for years, and we failed to keep them around, and now they are finding success as head coaches in other teams. So, If they decide to clean house and fire the coaching staff, they need to have someone extremely remarkable ready to take the reigns of this historic franchise.

My current overall disposition regarding my Redskins: TORMENTED

And now for the rest of the league:

Saints 12-Cowboys 10: The Saints defense neutralized Zeke, Dak, and Cooper completely, which was a beautiful thing to watch. Bridgewater played better than expected and seemed shaky at times, but he got it done at the end, and that is what matters here. The Saints look solid.

Chiefs 34-Lions 30: Kenny Golladay has officially arrived. Matt Patricia is turning this team around. The Lions gave the Chiefs a run for their money, but the Chiefs have way too much firepower to contend. The Lions are now in the mix things fun in the NFC North.

Raiders 31-Colts 24: As I said in previous blogposts, the Raiders are a much-improved team, and nobody expected them to be 2-2 by week 4. The Colts have surprised me how well they are fairing without Andrew Luck. These two teams on the rise.

Patriots 16-Bills 10: Tom Brady struggled, to say the least, it might be a sign of things to come. Josh Allen had 3 interceptions, and the Bills still managed to keep the game close. ’till the end.

Panthers 16-Texans 10: Kyle Allen is quarterbacking the Panthers to a 2-2 record, and they have a shot at their division. Deseaun Watson is struggling; if this continues, Bill O’brien’s seat will start to get hot.

Buccaneers 55-Rams 40: Jared Goff threw for 517 yards but also threw 3 interceptions. Gurley finally got me some fantasy points, but it was not enough to stop the Bucs who seem to be on the rise under Bruce Arians. Winston is also starting to play better.

Browns-40-Ravens 25: Baker Mayfield and the Browns got back on track; Nick Chubb ran wild through the Ravens. This division is bananas.

Bears 16-Vikings 6: Khalil Mack is destroying opposing teams. The Vikings came in with a strong defense. Dalvin Cook is probably the most dynamic running back in the NFL, but the Bears completely shut them down. Kirk Cousins looked overmatched the whole game.

Steelers-Bengals: This game was the 0-3 Bowl, and the Steelers came out on top. It means very little, but a win is a win. This kid Mason Rudolph seems to their future starter, so now Pittsburgh and most notably Mike Tomlin have some breathing room. The Bengals are going nowhere fast. They are rebuilding after all those years under Marvin lewis.

Seahawks 27-Cardinals 10: Kyler Murray is quarterbacking a bad team, so not much is expected from him and the Cardinals. I cannot compliment the Seahawks much since they beat a bad team, but a win is a win, and we will see how next week goes.

Eagles 34-Packers 27: The Eagles came alive against a much improved Packer defense. Carson Wentz played his best game so far this season, and Aaron Rodgers played his worst.

Jaguars 26-Broncos 24: I thought the Jaguars were done when Nick Foles went down for the season in week 1, and I was so wrong. Garner Minshew now has two huge wins. Fournette ran for 225 yards. The Broncos are one of the biggest disappointments of the season; nobody expected them to this bad at 0-4.

Chargers 30-Dolphins 10: Philip Rivers and company were supposed to win this game, enough said. The Dolphins are a disaster.

Titans 24-Falcons 10: Marcus Mariota had a great game with 3 TDs and 0 interceptions. The Titans needed this victory badly. The Falcons are a mess. The Atlanta Falcons played in the Super Bowl just a few years ago, and now they are awful. Dan Quinn’s seat is getting red hot.

Email: Rodrioja@rodrioja.com
If you would like to support this blog, please feel free to donate anything you can to my Venmo. It is all much appreciated.
%d bloggers like this: